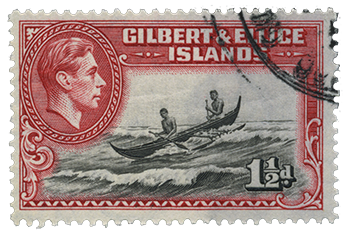 One of the many fun aspects of participating in Volunteer Week at the American Philatelic Center is the chance to take a break from your assigned task and spend a little time rooting through a pile of thousands and thousands of stamps, free to volunteers for the taking. Many of the volunteers are advanced collectors, and this activity probably doesn’t fit their interest, but it makes me feel like a kid again and I enjoy seeing many familiar stamps from my years of collecting and taking 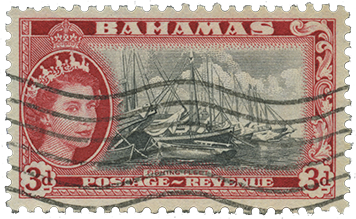 away a few to fill spots in my worldwide collection.
The two British colony bicolors shown here were among the ‘treasures’ I brought home. To me the British Colony bicolors, which began appearing in the mid-30s, are among the most beautiful classic stamp designs–rich colors, exquisite engraving, and exotic lands and cultures. Also shown here is a third stamp from the Volunteer Week ‘thousands’ that shows a later take on the colonies pictorials, when full color imagery was introduced. It’s 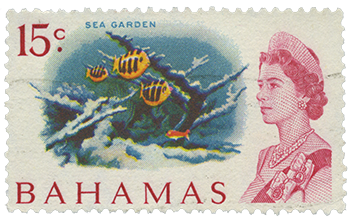 true there are many beautiful stamps in this format, but for me the bicolors remain tops.
The stamps illustrated are the Gilbert & Ellice Islands 1 1/2d ‘Canoe Crossing Reef’ (1939),  Bahamas 3d ‘Fishing Fleet’ (1954), and Bahamas 15c ‘Sea Garden’ (1967).
What are some of your favorite stamp designs?