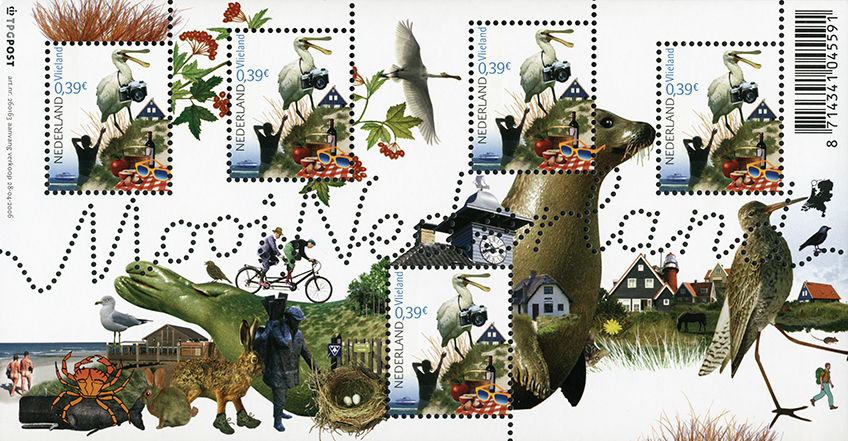 Many people, including stamp collectors, find the stamps of the Netherlands a bit too avante-garde, but I’ve always admired how their designers push “the boundaries.” This sheet from 2006 contains five stamps for ordinary mail use within the Netherlands. It would’ve been easier to put multiple copies of the stamp on a sheet side-by-side, and certainly more economical. The Netherlands, however, chose to do more by making a sheet whose title “Beautiful Netherlands” (Mooi Nederland) is composed of perforated letters. And in addition to the playful Eurasian Spoonbill (Platalea leucorodia) with a camera around its neck on each stamp, other images of the wildlife and natural beauty of Vlieland, the subject of the stamp, are attractively presented on the sheet.

Vlieland is an island in the northern Netherlands, one of the West Frisian Islands, lying in the Wadden Sea. It has one major town, Oost-Vlieland and is the second most sparsely populated municipality in the Netherlands. Most of the island is sand dunes, but there are some wooded areas and meadows. More than anything, there is piece and quiet.

“Beautiful Netherlands” is a series that began in 2005 and continues to today. Many of the sheets contain five different stamps as does the sheet below from 2014 which features Ceramics from different areas of the Netherlands: Loosdrecht, Tegelen, Delft, Harlingen and Makkum. 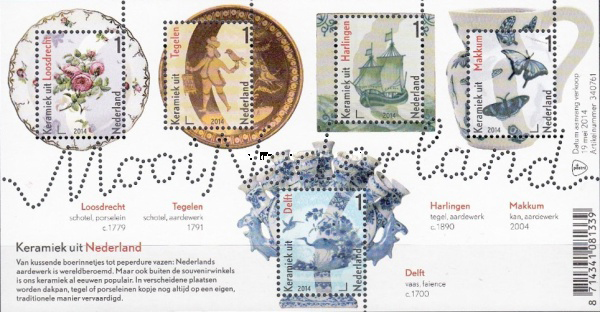 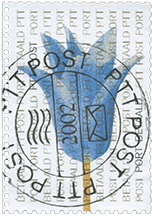 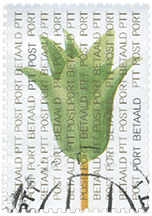 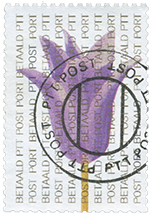 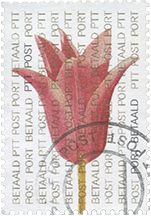 Encountering this series of “Tulip” stamps, I assumed because of the subject, the clean contemporary design, and the PTT POST imprint, that these were from the Netherlands. There was, however, no monetary value on the stamps.

The other bit of information on the stamps was PORT BETAALD (“POST PAID” in Dutch). Further investigation led to the fact that these were used for Bulk Mailing.

I was drawn to these stamps for their beauty—a refreshing approach to bulk mail stamps, which in the U.S. are generally quite bland in design. Perhaps even junk mail can bring a smile to your face, provided the stamp is appealing.

I love stamps! And as a corollary I love mail on which stamps are used. My albums contain mostly ‘used’ stamps, with postmarks indicating “We have liftoff”—a message entered the mail stream on a particular day at a particular place. So for me it was natural to choose the 1993

Letter Writing Day stamps from the Netherlands (favorites of mine) for the first monthly “Featured Stamp” on this website. They were issued September 14 of that year.
I’d long admired the design of these stamps: beautiful colors, airy design, and a sense of words freely flowing. And after 25 years I decided to contact the designer Montse Hernández i Sala and learn more about their creation. She graciously responded to my questions:
What design direction were you given by the PTT?
Very little—only that they needed a design that had to do with writing and mailing. I was left totally free.
Can you tell me about how your graphic ideas evolved?
I wanted to create a “rain of words” falling from the pens and pencils into the envelope. The pencils are bound together, which symbolizes unity in diversity. The little black circles around the envelope playfully suggest an order in which you could draw an envelope without lifting the pen from the paper. It was also a hint about unity—writing as a connecting link between humans. The rain is made out of showing the word “greetings” in different languages. (An interesting aside is that I was pregnant when I was designing these stamps. Initially I added characters that formed the name for a girl and a boy between the other characters. By the end of the designing process I had removed many characters, and only the name for a girl remained. The stamps were published. My child was born soon after. It was a girl.)
What medium did you use for the artwork?
Paint, paper, canvas, glue.
Why did you choose the colors used?
I love blue, black and white—brilliant contrasts. At the end of the process I was asked to use a bit of green in one of the stamps.

Are there other insights into your designs or
design process you would like to share?
To design a stamp was my dream since I became aware of Dutch culture. I was born in Spain and came to the Netherlands at the age of 22. Soon after I graduated as a graphic

designer I was asked to design the 1993 Greetings stamps, “WENSPOSTZEGELS” (issued February 2, 1993, shown at right), containing two different designs about “celebrations.” I couldn’t believe my luck! Very soon after that I was asked to design the “TIEN VOOR UW BRIEVEN” stamps (Letter Writing Day). My career as a designer had just started, and I had already accomplished my dream (4X)! This fact opened many doors for my design practice. At the beginning, people thought that I was an illustrator, because of the way I had designed the stamps. But I wasn’t. It required considerable effort to change that perception. Now, after many years of designing, I have come to see what kind of a designer I am. My work balances art and graphic design. I enjoy designing books and catalogues, and I am currently designing to raise awareness about avoiding plastic waste. My project called “RESET” explores that theme and was shown at Museum Het Valkhof in Nijmegen.