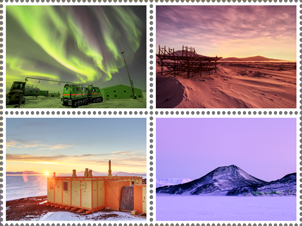 Heat-activated imagery on stamps, once unique, has been seen frequently in recent years. On 7 October 2020, Ross Dependency issued a set of four stamps using this printing technique to present a unique visual approach to the four 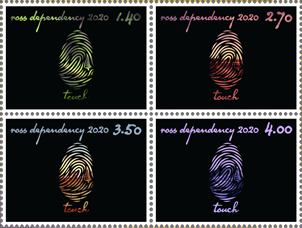 seasons. Since Scott Base is a New Zealand research facility on Ross Island in the Antarctic, you might wonder about what would appear on a set of four stamps themed “Seasons on Scott Base.” The fact that the stamps have to be heat activated to reveal the underlying imagery only adds to the mystery, but the real thrill for me was seeing the photographic imagery.

The photographs were taken by Jonny Harrison, an electrician on the base. The visual representation of each  season is stunning:
$1.40 – Aurora Australis (Southern Lights)
$2.70 – Spring Sunrise
$3.50 – Summer Sunset
$4.00 – Autumn Scene

(This article originally appeared in the July 2021 issue of Philateli-Graphics.)