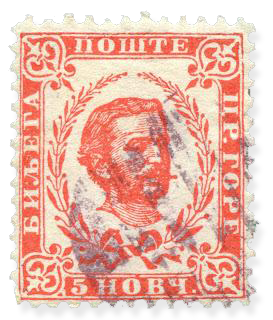 In 1874 the first Montenegro definitive stamps were issued in conjunction with the opening of the first public post office in Cetinje. The seven stamps had a common design featuring a portrait of Prince Nicholas I. Additional printings of these stamps occurred in 1879 and 1893.
In 1893, to mark the 400th anniversary of printing being introduced in Montenegro, the definitives were overprinted. This is the first instance of a postage stamp honoring the history of printing, and for the topical collector with that interest, these overprints 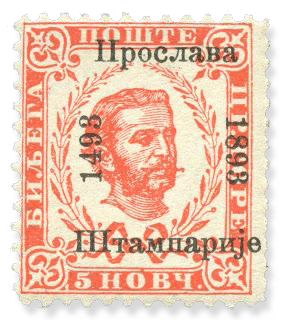 might be the first items in their collection. (For more about philately and the history of printing, contact the Graphics Philately Association.)
Looking back to 1493, Durad Crnojević (d. 1514) was the Lord of Zeta, in present-day Montenegro. He founded the first South Slavic printing house. Using a printing press brought to Obod by his father Ivan Crnojević (d. 1490), and later moved to Cetinje, Durad managed the printing of several religious books from 1493-1496 with the help of Hieromonk Makarije. These included Octoechos of the First Tone (Oktoih prvoglasnik), an Orthodox liturgical book, finished early in 1494. (See page illustrated here.) The books were printed in black and red, and were ornamented. 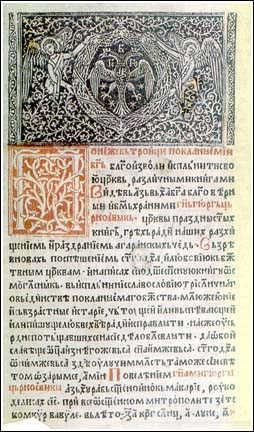 This period also marked one of the darkest phases in Serbian history. Only Stara Crna Gora , the mountainous region of Zeta ruled by Ivan Crnojevic and his son Djuradj, were still free from Turkish conquest. Just before this region also fell to the Turks, the newly introduced printing in Cetinje was focused on spiritual and ethnic awareness. This effort was terminated by the Turks in 1496.
Just as this period in Eastern European history is complex and interesting, so too are the first definitive issues of Montenegro, as variations in production abound.