Alois Senefelder (1771-1834) invented the lithography printing process which today accounts for most of the world’s printing output. Senefelder was a German playwright and actor who could not afford to have a play he had written published, and so he conducted experiments in the hope of finding an inexpensive printing process that would enable him to self-publish. His experiments led to his using smooth limestone and an acid-resistant greasy marker that allowed him to etch an image into the flat stone surface. The stone could then be inked, and paper pressed against the stone would receive the printed image. He refined his discovery and eventually started a publishing firm.

With most of the world’s postage stamps now being printed using the lithographic process, it’s surprising Senefelder only appears on three. Compare that with Gutenberg who has been honored by numerous stamps. 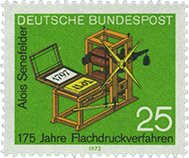 My favorite Senefelder stamp was issued by Austria in 1998 to commemorate the bicentennial of the discovery of lithography. The stamp features a litho stone on which Senefelder’s likeness has been etched, and the stone is being hand-inked with a roller. This reminds me of my days as an art student when I was fortunate to have been able to experience the stone lithography process. 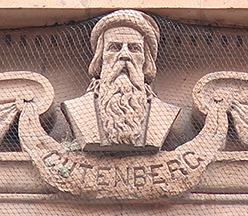 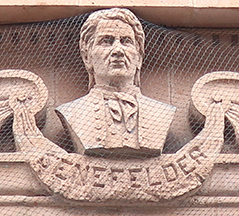 In the past few years, I’ve found Senefelder in two interesting places, my hometown of Baltimore and in Mexico City. While walking in the old part of Mexico City I noticed two busts high on the façade of a building. Even from afar I could identify Gutenberg, and with the help of my camera’s zoom I saw that the other bust was that of Senefelder. Obviously this building at one time had been occupied by a lithographic printer. 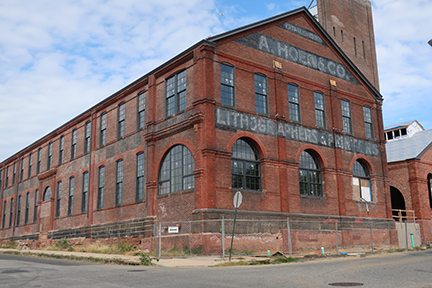 Back in Baltimore, the buildings once occupied by the lithographic printing firm of A. Hoen & Company are being repurposed into a multi-use complex composed of social entrepreneurs, non-profits, service providers and researchers. I recall decades ago visiting the Hoen firm and seeing numerous old broken litho stones at the edges of the parking lot. The firm had long since converted to printing with metal litho plates. 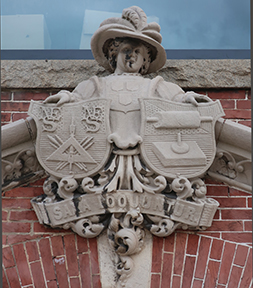 The firm, founded in 1835, occupied the site from 1902-1981 and was one of the world’s most prolific lithographic printers. It specialized in high-quality sophisticated work, including maps influential in settling the west and establishing national boundaries, e.g., maps for the joint commission determining the boundary between the United States and Canada. Above the entrance to the main Hoen building are symbols relating to Senefelder and the lithography process as well as the Latin words, “Saxa Loquuntur.” (The Stones Speak).