A friend called last night. He was extremely agitated. He’d made a mistake at work. His job requires working six and seven days a week. He isn’t able to exercise regularly. His sleep is impaired. Yes, my friend made a mistake at work, but what about his superiors who have allowed overwhelming responsibilities to be part of my friend’s job? He has to find balance in his life. I’ve been there. Daily I’m still there…trying to find balance. Some days I’m more successful than other days.

In 1709 Alexander Pope’s poem, “Essay on Criticism, Part II,” included these well known lines, “…To err is humane; to forgive, divine.” (In the early 18th century, “humane” was the accepted spelling for “human.”)

A pressman made a mistake in 1918, hence the Inverted Jenny. What reprimands did he receive when the discovery was made? And yet that mistake has had a divine influence on stamp collecting ever since.

And who was responsible for perforating Spanish stamps from 1865 to 1950 (That’s 85 years!) when the majority of those stamps were rather poorly centered? Who cares? The hunt for well-centered examples is an exciting challenge for collectors. And for me, those off-kilter stamps are simply fun to look at. Do you agree? 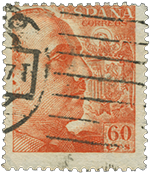 I hope my friend is feeling a bit better today. He’s an extraordinary individual, probably the most intelligent person I know. I hope he finds some of the joy that’s simply another dimension of our off-kilter mistakes. “…to forgive, divine.”