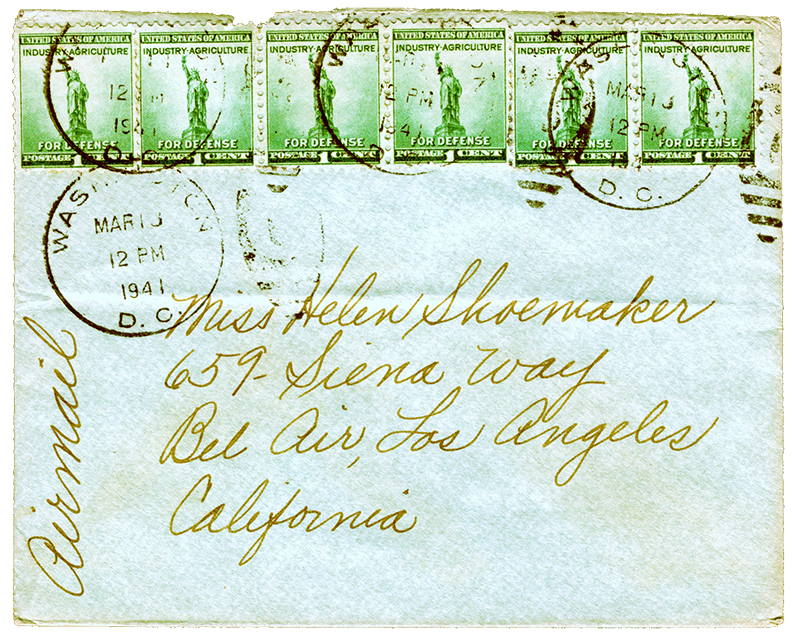 Sometimes a cover with no unusual philatelic worth attracts me simply because of its visual appeal. This “green” airmail cover is a good example. The six-cent airmail rate is paid with six one-cent stamps from the 1941 National Defense Issue. Normally the carmine 6-cent airmail stamp from the Transport Plane Series would have been used for this kind of letter, but other stamps or combinations were regularly used as well.

What struck me about this cover was its beautiful overall green appearance. Did the mailer intentionally choose to use the six green one-cent stamps to compliment the green envelope, or were these stamps simple at hand? I tend to think the former, though we’ll probably never know. In any event, this green-on-green cover caught my eye when I was examining a box of miscellaneous U.S. covers. So, almost 80 years after this cover flew from Washington D.C. to Los Angeles, it’s landed in my collection of visually pleasing covers.

Meet the puffin—our stamp for June. Issued in May as a EUROPA theme stamp by the Faroe Islands, it is one of a pair featuring puffins. A striking image to convey the “Endangered animal and bird species” theme.