In the late 19th century, stamp use was often indicated with a manuscript cancel, especially on revenue stamps. The cancel was applied with a nibbed pen and ink. Today, the script cancel is making a comeback. We’ve all received mail cancelled by the hand of zealous postal workers. The nibbed pen is gone, often replaced with a broad-tipped black permanent marker. These cancels have been the subject of numerous complaints in the philatelic press, because they deface beautiful stamps and at times are even an insult to properly cancelled mail items. More than once, however, I’ve considered starting a specialized collection of these cancels. But then I think, “To what end?” 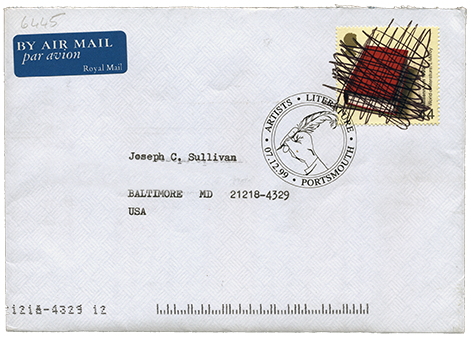 A favorite of mine is the First Day Cover displayed here, thoughtfully prepared by a philatelic friend using the “World of Literature” stamp from Great Britain’s Millennium Collection set of 1999–The Artists’ Tale. You can guess my reaction when I found this letter in the mailbox: “!#..!*#” But the cover also intrigues me. This could be the centerpiece of my contemporary manuscript cancel exhibit. This particular script cancellation is well-considered and undoubtedly from a practiced hand. Note how many of the lines mimic the angles of the book illustrated on the stamp. Also note how many lines crisscross. (Crosshatched cancels were common in ‘old’ days.) The energy and overall positioning of the script on the stamp is also appealing. Finally, what a marvelous sequence of juxtapositions: delicately articulated postal cancel and frenetic script cancel; quill pen from days of yore and ballpoint pen scribbling today; postal cancel ‘kissing’ the stamp’s bottom edge, and script cancel smothering entire stamp; two postal workers displaying quite different approaches to the same task.

I love this cover.

One thought on “The Script Cancel Returns with a Vengeance! (Great Britain)”

We’re getting our first real snow of the winter in the Mid-Atlantic. This stamp from Great Britain’s 1983 Christmas set evokes that snow and also the sentiments of this month’s Valentine’s Day.