On August 3, 2018 I wrote about “Beautiful British Bicolors!” These stamps were favorites of mine as a young collector in the 1950s because of their beauty, availability and inexpensive cost. They’re still favorites, but recently sorting through a box of U.S. stamps I came across some damaged, but still beautiful, U.S. bicolors from the Pan-American Exposition set of 1901.

As a boy, most of the U.S. bicolors were beyond my means, and by the time I had some “means,” U.S. stamps were no longer a main collecting focus. But I still appreciate some of the early bicolors like the higher values of 1869 and especially the commemorative series of 1901 promoting the Pan-American Exposition. This set of six stamps featured both exquisite decorative frames and classic black engravings of period transportation. 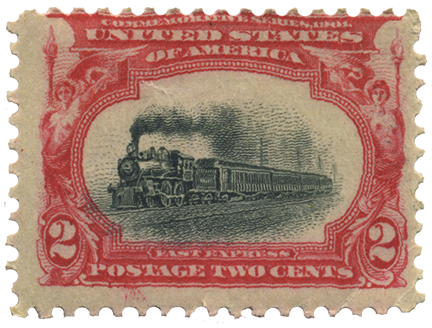 A ride on the “Empire State” Express (2¢ stamp), a flagship of the New York Central and Hudson River Railroad, would have been a thrill—engine smoke and all. It initially ran between New York City and Buffalo, and later its route lengthened to Cleveland. In its early days it was the first train with a schedule speed of over 52mph.

I’d love to hop up on 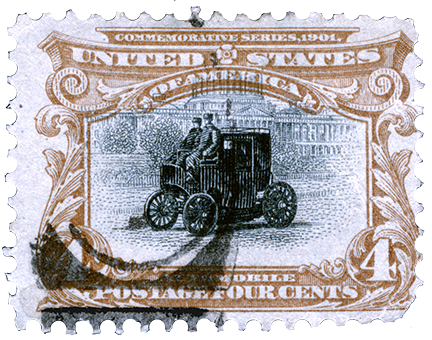 the raised driver’s bench of the electric car (4¢ stamp). I wonder how fast it could travel—probably not fast at all, especially considering the roads of the time. This particular car was passing in front of the Capitol, and I think it would be fantastic to experience Washington at that time. 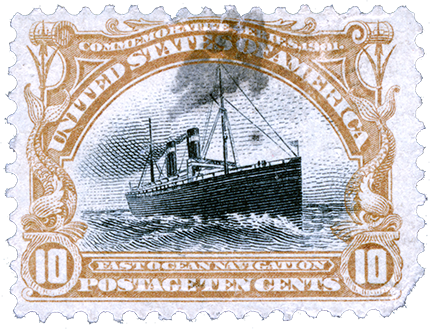 The 10¢ Fast Ocean Navigation stamp features the steamship St. Paul, a trans-Atlantic ocean liner, with smoke billowing from its twin funnels. The cloud-like cancel at the top center of the stamp seems like even more billowing smoke, but not so. The ship was launched in 1895, but was chartered for U.S. Navy service in 1898, and it again saw military service during World War I. But I wonder what it would have been like to cross the Atlantic in one of its initial voyages as a luxury liner.