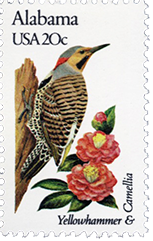 One of the most challenging—and beautiful—achievements in U.S. postage stamp artwork is  the “50 State Bird and Flower” stamps issued in 1982. The imagery is exquisite, with each stamp deftly composed and different from every other. Each bird/flower combination has a  naturalness of appearance that seems inevitable. And each is beautifully silhouetted with white space.

What makes these stamps unusual is that they were the first 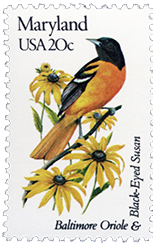 There were creative challenges. Each stamp had to be distinctly different, not to mention visually appealing, and yet several states had the same state bird. For example, the Cardinal would appear on seven stamps, and the Western Meadowlark on six. As for state flowers, the Apple Blossom and Magnolia appear twice and the violet three times. 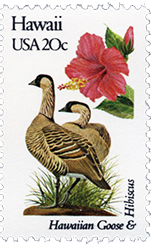 And yet looking at the sheet of 50 stamps, those multiple renderings of bird or flower aren’t noticed because each presentation is unique.

Father and son were up to the challenge. Arthur was a noted avian illustrator having published Birds of the World and Guide to the Birds of North America. In his words, “There are many illustrators who are only concerned about portraying birds—or other animals—accurately. While this is, of course, very important, I try to make my work 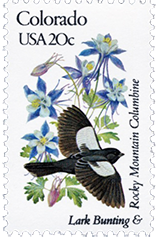 artistically good as well as accurate.”

It was Arthur’s practice to begin work in the early morning in his Jericho, New York, studio and continue to late at night. Father and son worked together on separate drawing tables. Arthur would position the bird on his art board and indicate to son Alan the approximate position of the flower. Alan would then sketch the flower art on the board. Father and son first made rough sketches of their subjects 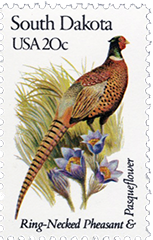 and then proceeded to greater detail, at times using pastels for color. When they deemed their sketches satisfactory, the drawings were transferred to art board in paint. The process was smooth, with each artist achieving his vision.

Those final paintings were five to seven times the size of a stamp. The artwork required intense focus, and stamina as well, to achieve the graceful lines, minute detail, and vibrant color that would reproduce well at stamp size. 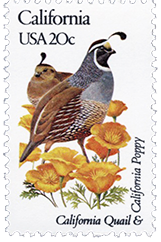 In the Spring of 1982, Charles Kuralt happened into a post office to buy some stamps and emerged with a sheet of the State Birds and Flowers stamps which in turn led to a segment on CBS News Sunday Morning expounding on the work of the Father and Son artists. Take a look at this unique artistic achievement:
https://www.youtube.com/watch?v=hXsVBSNXyUc