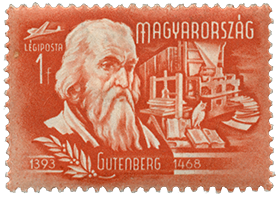 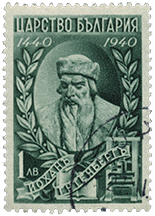 So, if Gutenberg didn’t invent printing, why is he so admired? His genius was much like many other “inventors.” He took pre-existing technologies (printing, the press, movable type, ink) and modified each so that they functioned together as a viable system for producing cost-effective multiple copies of printed matter.

It’s likely that the bulk of his inventiveness and labor was devoted to perfecting a system for making and using movable metal type, hence my Favorite Gutenberg stamp is not one that features a portrait of him, but rather features movable type. Besides, no portrait of Gutenberg is known to have been made until 1567, 99 years after his death, so what we see on stamps is an artist’s imagination at work. 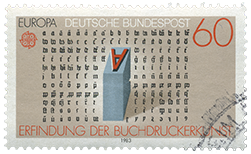 My Favorite Gutenberg stamp was issued by Germany in 1983, one of a pair of Europa stamps. That stamp features a piece of cast metal type against a background of Gutenberg’s gothic type letters that can be found in his printing. The stamp focuses on the most significant aspect of the printing method he developed—movable type. And personally, I see in the imagery of one piece of movable type against a background of numerous printed letters as a graphic metaphor for the explosion of knowledge that Gutenberg’s “invention” made possible.

For information about all things philatelic/printing/graphics, check out the Graphics Philately Association.

Britain’s Millennium stamps of 1999 and 2000 are a highpoint of concept and design for me. This stamp themed “Linking the Nation” was designed by John Lawrence and is one of four from the Transportation set. The artwork was cut from a boxwood block and highlights the artist’s penchant for complexity and gentle humor.