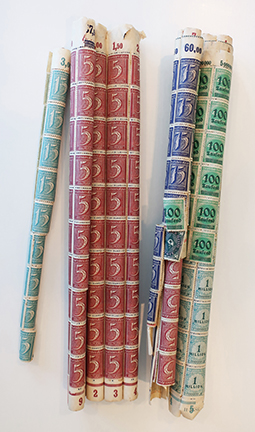 From early in 1921 to late in 1923 Germany experienced one of the worst periods of inflation in history. For example, to mail a postcard locally at the beginning of 1921 the postage required was 30 pfennig. In December of 1923 the cost to mail that same postcard was 16 billion marks.

During this period of inflation, rates often changed more quickly than stamps could be produced to meet the new requirements. Confusion was rampant, and stamps whose face value had become too low to be of any practical use became waste (or later were included in inexpensive packets sold to new collectors worldwide).

I “rescued” the stamps shown above from the trash at my local stamp club. Years of neglect enabled changes in humidity to curl these stamps into worthless rods, but I found them visually striking. Their most unusual state reminded me of those inexpensive stamp packets from my youth, and more importantly of a period of extreme hardship in Germany.

The graphic variety of large numerals 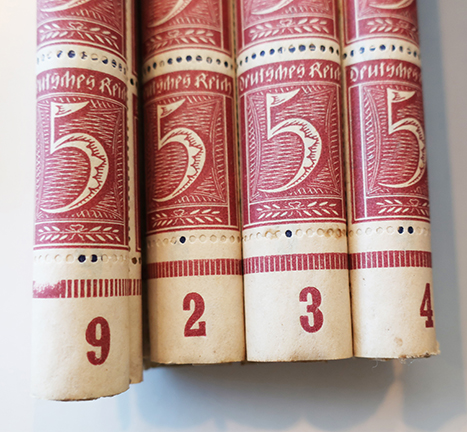 on stamps has also always fascinated me. The combination of the repeated numeral “5” and the column numerals (9, 2, 3, 4) from the stamp sheets shown in the close-up creates a striking visual for me.