I was bewitched by the 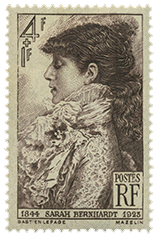 images of two women recently—one real, one imagined: Sarah Bernhardt and the costumed woman of Provence. The alluring beauty of two stamps!

The “Provence” stamp (left) was produced during the WWII occupation of France, and the Bernhardt stamp (right) was planned and engraved during the occupation and issued just days after the German surrender.

The image of Sarah Bernhardt (1844-1923) on the semipostal from 1945 designed and engraved by Pierre Gandon (1899-1990) was based on an 1879 painting by Jules Bastien-Lepage (1848-1884) and marked her 100th birth anniversary. The portrait’s sepia tonal range is extraordinary. My eyes wonder the stamp and marvel at the exquisite detail. Have you seen a more beautifully engraved stamp?

The Lady of Provence (my title for the stamp) was one of a set of six stamps featuring 18th century costumes from different regions of France. The set is quite beautiful and features the work of five skilled engravers. Albert Decaris was the engraver of the Provence and Brittany stamps from the set. His style of engraving is radically different from the Bernhardt stamp, with bold strokes throughout. This almond-eyed beauty of Provence reminds me of several other Decaris stamps featuring women in dramatic settings, e.g., Monaco’s 1975 stamp set marking the 100th anniversary of the opera, Carmen.

I wondered about these stamps and other wartime semipostals. What were the funds collected used for and why were the images chosen? The surtax from the “costume” set went to The National Relief Fund, which coordinated aid efforts associated with the war. The Fund was the only organization authorized by the French State to create appeals for and accept public donations. The surtax from the Bernhardt stamp benefited the Actors Welfare Society known as Foundation Coquelin.*

The theme of the “costumes” set of semipostals, and others of the war era, provide a window into the realities of politics in France at the time. In 1940, with the collapse of the Third Republic and the creation of the French State, stamps reflected the political climate. The Vichy government tried to present itself as one of national unity. Portraits of the aging national hero, Marshal Philippe Petain, head of the French State, were featured on many stamps of the era. The government, which arose out of defeat, looked to a somewhat idealistic French past and celebrated the virtues of the peasantry and a “return to the soil.” Blame for many of France’s problems was directed at the urban, industrialized element of society. Hence the imagery of 18th century costumes and agrarian life. **

Beauty in the midst war is a not uncommon trait of postage stamps—a paradox for a collector like me.