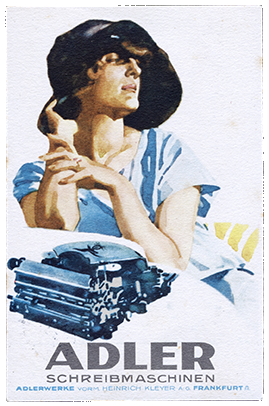 Typewriters, whose hayday has passed, interest me. I like the process of using a machine to create something—in this case a tangible document. And “Typewriters on Stamps” is a collecting topic that I know one philatelic friend pursues with passion.

The typewriter advertising postcard shown here was illustrated by Ludwig Hohlwein, a leading and influential German graphic designer in the first half of the 20th century. The woman’s image shows his flair for progressive fashion illustration which he utilized on behalf of a number of clients. I don’t know anything about the typewriter other than what is printed below the illustration abaout the manufacturer: ADLERWERKE VORM. HEINRICH KLEYER A.D. FRANKFURT.

The message on the reverse side of the card refers to Herr Ludwig Thoma, the owner of a typewriter retailer located in Karlovy Vary, Czechoslovakia. The card was sent in February 1928 from Karlovy Vary to Pisek, also in Czecholovakia, and is correctly franked at the postcard rate with a 50 Haléřů stamp featuring Tomáš Masaryk, the Czechoslovak politician, statesman, sociologist and philosopher (Sc117). 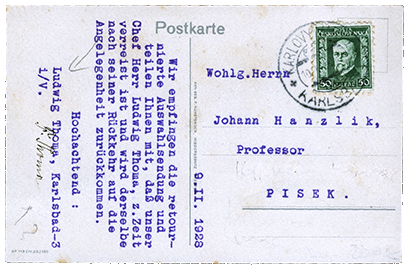